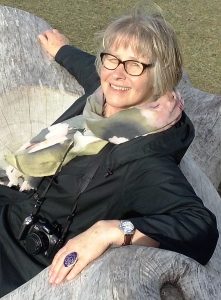 Prior to training as an Alexander teacher with Misha Magidov at the North London School of the Alexander Technique in 1983, Dorothea worked full-time for 7 years as a physiotherapist, including gaining experience in Rehabilitation and Hydrotherapy.

She was the Main Assistant for the Westminster Alexander Training Course, London, and teaches regularly as a visiting teacher on training courses in Europe and Japan.

2007 she became STAT student Moderator for several STAT training courses. From 1994 until 2004 she served on STAT council including as Chair, as Chair of International Liaison and the Training Course Committee.

She has lectured and given workshops at International Congresses of the Alexander Technique and runs workshops for pupils and teachers in Estonia, Finland, Germany, Japan, the Netherlands, Spain and the UK.

Dorothea was fortunate to have worked regularly for extended periods with Bill Williams, Peggy Williams, Marjory Barlow, Glynn MacDonald and Walter Carrington. For the last 10 years, she exchanges work with Anne Battye, and studies the Dart procedure with Joan and Alex Murray.

She is also a practising and exhibiting fine artist and sculptor.

We use cookies to ensure that we give you the best experience on our website. If you continue to use this site we will assume that you are happy with it..OkDon't allow